The biggest feature we added in virt-manager 1.0 is VM snapshot support. Users have been asking us to expose this in the UI for quite a long time. In this post I'll walk you through the new UI.

Let's start with some use cases for VM snapshots:

Internal snapshots are the snapshots that QEMU has supported for a long time. Libvirt refers to them as 'internal' because all the data is stored as part of the qcow2 disk image: if you have a VM with a single qcow2 disk image and take 10 snapshots, you still have only one file to manage. This is the default snapshot mode if using the virsh snapshot-* commands.

These snapshots can be combine disk and VM memory state for 'checkpointing', so you can jump back and forth between a saved running VM state. A snapshot of an offline VM can also be performed, and only the disk contents will be saved.

While the overlay files have to be qcow2, these snapshots will work with any base disk image. They can also be performed with very little VM downtime, at least under a second. The external nature also allows different use cases like live backup: create a snapshot, back up the original backing image, when backup completes, merge the overlay file changes back into the backing image.

Understandably we decided to go with internal snapshots in the virt-manager UI. To facilitate this, we've changed the default disk image for new qemu/kvm VMs to qcow2.

The snapshot UI is reachable via the VM details toolbar and menu:

That button will be disabled with an informative tool tip if snapshots aren't supported, such as if the the disk image isn't qcow2, or using a libvirt driver like Xen which doesn't have snapshot support wired up. 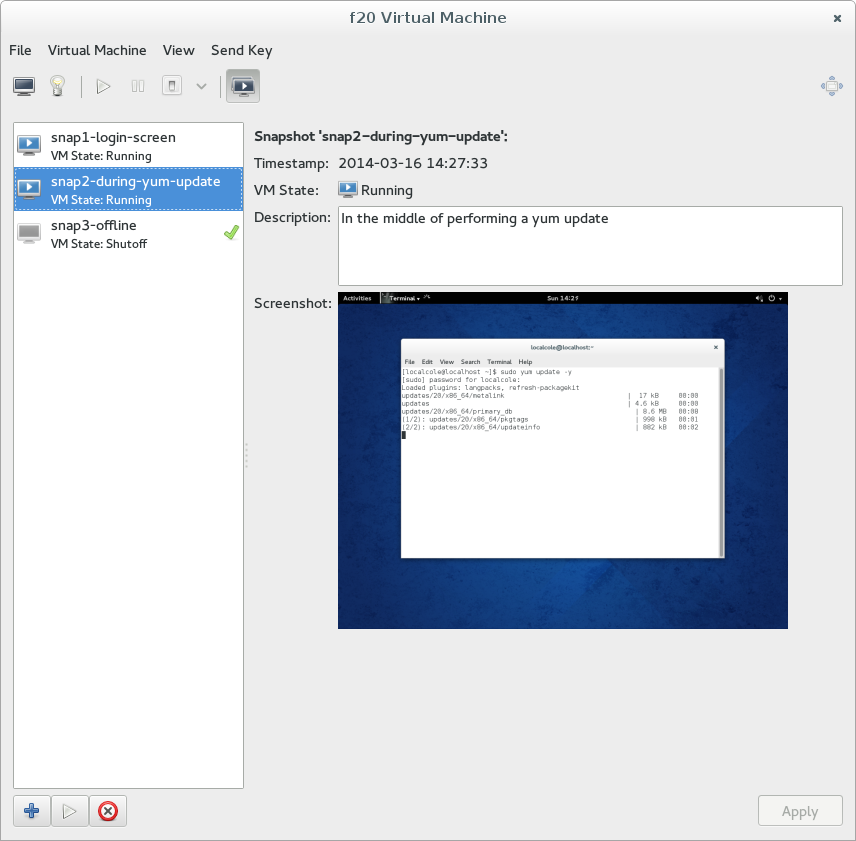 It's pretty straight forward. The column on the left lists all the snapshots. The 'VM State' means the state the VM was in when the snapshot was taken. So running/reverting to a 'Running' snapshot means the VM will end up in a running state, a 'Shutoff' snapshot will end up with the VM shutoff, etc.

Internal snapshots are all independent of one another. You can take 5 successive snapshots, delete 2-4, and snapshot 1 and 5 will still be completely independent. Any notion of a snapshot hierarchy is really just metadata, and we decided not to expose it in the UI. That may change in the future.

Run/revert to a snapshot with the play button along the bottom. Create a new snapshot by hitting the + button. The wizard is pretty simple:

That's about it. Give it a whirl in virt-manager and file a bug if you hit any issues.